I didn’t realize two years ago when I started watching the television show Outlander that I would have the opportunity to meet so many wonderful people and take part in unforgettable experiences while doing something meaningful to help others.  In less than one week, I will attend the Outlandish Gatherings in Savannah, Georgia.

In April, I traveled to New York to represent the Cooklander To the Stove cookbook, and marched in the New York City Tartan Day Parade.

When I was in New York, fans were talking about the Outlandish Gatherings in Savannah.  I live in the Jacksonville area, Savannah is an easy drive from North Florida.  I started doing research about the Gatherings, went to the Eventbrite website and thought I was putting my name on a wait list; I was pleasantly surprised when I was directed to a field to purchase a ticket.  Hurrah!

I messaged April Steele, one of the organizers of the event, to inquire about representing Cooklander.  April sent me some wonderful information regarding the history of the event, and I knew Cooklander would be a perfect fit as a vendor.  From the information she sent me, I read, “Outlandish Gatherings was the first to organize a “for fans, by fans” gathering for Outlander fans and has grown to be the largest four-day Outlander fan event in the world.”

As I prepared for my trip, I called to make a reservation at the hotel where the event is headquartered.  Here is the conversation with the reservationist:

R: Are you attending with a group?

R: Oh My God! I love that show! I started reading the books too.  I’m reading book 8.  Is anyone good from the show going to be there?

Me:  I think so.  Grant O’Rourke who plays Rupert and Stephen Walters who plays Angus.  Gaelic consultant Àdhamh Ó Broin will be there as well.

R:  When do you think season 3 will be televised?

Me:  I believe they are filming now. Maybe Spring 2017? Are you going to be working the weekend of the event?

R: Oh! I’m not in Savannah.  I’m in central reservations in the Midwest.  I’m going to finish reading book 8 over the winter when we get snow.

Me: Sounds like a good plan.  It’s nice to talk to another Outlander fan.  I’m looking forward to meeting more fans at the Gatherings.

R:  Have a great time! Enjoy your stay.

The theme of the Gathering this year is a nautical one based on Diana Gabaldon’s third book in the Outlander series Voyager.  The adventure takes the beloved characters to the high seas. 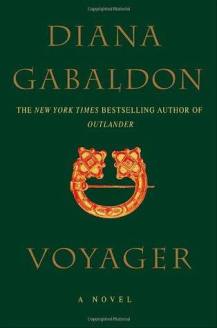 Appropriately, the Outlandish Gatherings in Savannah coincide with the Tybee Island Pirate Fest.  Over the course of the Gathering, several activities are planned to help fans get to know one another better, and give fans the opportunity to meet the special guests from the show.   “Popular Outlander cast members Grant O’Rourke (Rupert) and Stephen Walters (Angus) will both make appearances at the Gathering.” 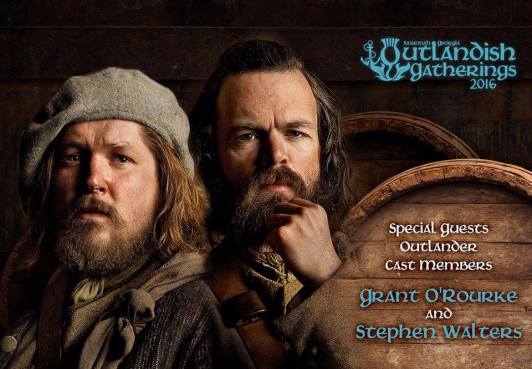 Multi-instrumentalist/singer/actor Elias Alexander will be providing entertainment with his band Soulsha.  I was so fortunate to meet Elias in New York at the Outlanders United Season 2 Premiere Event.

Outlander Gaelic consultant Àdhamh Ó Broin will be attending.  Elias and Àdhamh are both making a return visit to the Gathering.

The Gathering is raising money for World Child Cancer for the third year in a row, “This will be Outlandish Gathering’s third year raising money for the London-based non-profit that provides diagnosis, treatment, and palliative care for children living in developing nations. Outlander star Catriona Balfe (Claire Fraser) is a patron of the organization, which has enjoyed support from fans around the world.”  The goal is to raise $15,000 through all of the activities at the event.  If you are unable to attend the events, please see the online auction at http://outlandishgatherings2016.eflea.ca/.  The auction features over 100 exclusive Outlander themed items. The auction is open until 12:00 p.m. on Saturday, October 8, 2016.  The Gathering’s JustGiving page is https://www.justgiving.com/fundraising/Outlandish-Gatherings1.  It means so much to me to be representing Cooklander at this event.  One third of the proceeds of sales of Cooklander To the Stove are benefitting World Child Cancer. 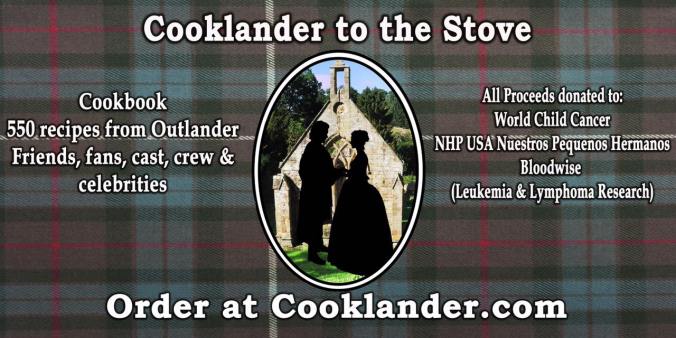 I’m thrilled to be sharing a vendor table with Cherry Picked Signs.  I’ll have information about the new Cooklander Triple Play Promotion.  Jessie Barbara of Cherry Picked Signs makes Outlander inspired decals for vehicles or any hard surface including wall decor.  Jessie will also have Outlander inspired quilts created by her friend Susan Leidy, as well as steering wheel covers, t-shirts, key fobs, and clocks.  Come say hello to all the vendors.

Outlandish Gatherings 2016 Roll Call! I am traveling with my River City Sassenach Sister @Fidgitywidget.  I would love to meet fellow Peakers participating in My Peak Challenge, ThePeakPosse members, and Cooklander Club members.  (I am SO excited there is a Cooklander Club!  Follow them on twitter @Cooklanderclb and on Facebook at Cooklander Club.) I look forward to meeting Outlander friends old and new in Savannah.  Here’s a sneak peek at my pirate outfit, I’m not finished yet, need a hat and some bling. 😉

I ordered my outfit from Aunt MJ Creations.  Mary makes hand-made ladies Celtic and Renaissance clothing.  I met her at the Jacksonville Beach Lannadoo Festival and Northeast Florida Scottish Games and Festival.  Check out her website http://auntmjcreations.com.

Press inquiries about Outlandish Gatherings 2016 may be directed to April Steele at april@outlandishgatherings.com.

Thank you so much for reading!