Happy New Year!  I’m learning I should also wish readers a Happy Hogmanay! I am getting ready for My Peak Challenge 2016. I participated last year, and am very excited to set new goals for myself for 2016, physical and non-physical goals.

Sam Heughan, Fight Camp, and Bear Strength Clothing Co. created a program to motivate individuals to reach their personal goals while at the same time raising money for Bloodwise. The success of My Peak Challenge was overwhelming.

I went to http://www.mypeakchallenge.co.uk to register my interest to participate in My Peak Challenge 2016. My Peak Challenge launches in January, and I will receive an email alert to the email address I provided to web site when they’re ready to go.

Information for My Peak Challenge can be found on various social media platforms. #MyPeakChallenge is the dedicated hashtag.

Bear Strength tweeted that welcome packs will be available January 5, 2016 for pre-order. The web site, http://www.bearstrength.co.uk, is user friendly, and converts to your preferred currency. They ship to the United States, and internationally. I have had a wonderful experience every time I have ordered from the company.

When you order the welcome pack, you receive information, Peak Gear, photos and a % of your purchase goes to charity.  This is last year’s pack. The bears have tweeted there is a new shirt this year.

I am proud to be repping Bear Strength in Florida.  Through the miracle of Twitter, I met an Outlander Fan that lives in my neighborhood, so I have my workout buddy. You might find some of our FL adventures by following RiverCity Sassenachs @saltlifesassies.

I look forward to seeing and hearing from all of the #MyPeakChallenge participants!  Bear Strength, Fight Camp, and My Peak Challenge accounts  have teased bigger and better things for 2016.

I’ll just leave this tweet from The Box Magazine here.

Thanks again for reading!

I reblogged this from Wolfe Tales, rynawolfe.wordpress.com.  You can also find Beth on Twitter @WolfeTales / Beth Wolfe.

He asked Sam about his reaction to the Outlander pilot after he first saw it, and Sam said, “People in Scotland were wary. Here come the Americans…they’re coming over here, and they’re going to make a show about Scotland…and they came and they have been so attentive to detail. They’ve really immersed themselves in our world. They’ve employed great numbers of very talented Scottish cast and crew. I think they did a great job.” He continued to say, “I’m really proud. I’m very proud.” To see the full interview, go to http://www.goldderby.com/news/10971/outlander-sam-heughan-caitriona-balfe-golden-globes.html. Sam’s response “inspired” this blog post. It made me wonder, as an American fan of the show, have I inadvertently been disrespectful to the people of Scotland? Have I focused on stereotypes in my blogs and Twitter comments? Is there something Americans have asked, that if you heard one more time, you would scream?

The show and the books have inspired me to reconnect with my Celtic roots, search for pieces of Scotland in Florida, and to start a blog in October 2014. By day, I teach preschool, and I am naturally curious. I genuinely want to know about authentic Scotland.

I have thoroughly enjoyed writing for fun, and writing on behalf of wonderful causes. Looking back on past blogs, I realized I haven’t shared some of my adventures as I attempted to survive Droughtlander. The interview and Sam’s response to the question, reminded me of meeting a family from Glasgow in June. My family and I took a quick trip to Walt Disney World in Orlando, FL.

Sitting at an outside table at the Magic Kingdom, I hear, “No, it’s crook!” from a gentleman, expressing his frustration about a drink machine accepting his money, but not dispensing drink. I have a habit, since I have started watching Outlander, of striking up conversations with strangers with accents in the hopes that they are Scottish. This time I knew I was right, that he was from Scotland, and confidently asked, “excuse me, where are you from?” When he responded Glasgow, I was so excited, I’m sure he thought I was crazy. I met his family, and introduced him to mine. We had a wonderful conversation. Of course, I brought up Outlander, and asked if they had seen the show. He said, “No, where can I watch it?” I explained how to find it, and said, “I think, being Scottish, you would be very proud of it. The first season was filmed entirely on location in Scotland, and it is historically accurate.” We moved on to discuss the Jacksonville Jaguars playing in London and vacation tips for Scotland and Florida. We had a humorous exchange about the correct pronunciation of “Heughan”. I was pronouncing it “HEW-an”, and he kept repeating it the Scottish “HewCH-an”. Sam explains proper pronunciation of his last name in an interview with Christopher John Farley at the WSJ Café, https://www.youtube.com/watch?v=UnHahznt5xI, about 1 minute 28 seconds into the interview. Sorry Sam! I will continue to practice.

My new friend from Glasgow and I follow one another on Twitter. He returned to Scotland after his Florida holiday and binge watched Outlander. He messaged me and said, “The acting was terrific. Randall was a bad yin as we say in Scotland.” He has also taught me what tatties and neeps are, mashed potatoes and turnips respectively, and was generous enough to submit a recipe to Cooklander To the Stove. (Go to http://www.cooklander.com to order your own copy.)

I inquired about a recipe for haggis before I realized most people in Scotland just go to the butcher to purchase.  On the subject of haggis, I now know far more about haggis than any Florida girl should know in my opinion. I submitted the tale of my “Hunt for Haggis” in the form of a recipe to the Cooklander To the Stove cookbook. You can find it on page 323 of the book. I found myself strangely curious, and wanted to try haggis. I went to the Epcot Food and Wine Festival in November, and tried an Americanized version.

I have been connecting with people on Twitter, and “meeting” people living in Scotland or from Scotland living in the United States. I posted pictures on Twitter, and friends responded with, “don’t be surprised if when you get real haggis, it tastes vastly different.” I tasted liver and oats. My favorite was the Glenfiddich Whisky I tasted. I have been given rave reviews of haggis purchased at Julie’s British Shoppe located in Melbourne, FL, http://www.britishshoppe.net.

Full disclosure, I sincerely adore the sound of bagpipes, my last name is McAfee, and my husband owns a kilt.

Thank you again so much for reading!  I look forward to your comments, and please feel free to help me clear up any misperceptions or misunderstandings about Scotland. 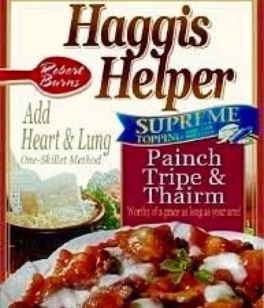 (This is not a real product.) Image via Pinterest